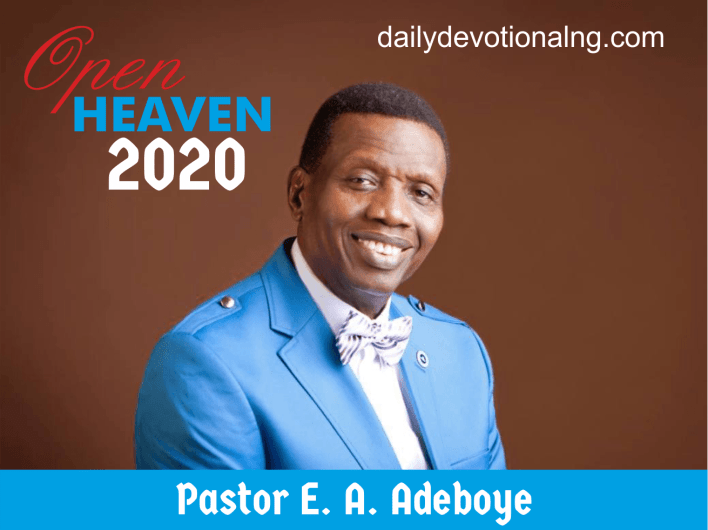 TOPIC: A PROMOTION IN THE PROBLEM

MEMORISE: “And we know that all things work together for good to them that love God, to them who are the called according to his purpose.” – (Romans 8:28)

READ: 2 Chronicles 20:1-26 (KJV)
1. It came to pass after this also, that the children of Moab, and the children of Ammon, and with them other beside the Ammonites, came against Jehoshaphat to battle.

2. Then there came some that told Jehoshaphat, saying, There cometh a great multitude against thee from beyond the sea on this side Syria; and, behold, they be in Hazazontamar, which is Engedi.

3. And Jehoshaphat feared, and set himself to seek the LORD, and proclaimed a fast throughout all Judah.

4. And Judah gathered themselves together, to ask help of the LORD; even out of all the cities of Judah they came to seek the LORD.

5. And Jehoshaphat stood in the congregation of Judah and Jerusalem, in the house of the LORD, before the new court,

6. And said, O LORD God of our fathers, art not thou God in heaven? and rulest not thou over all the kingdoms of the heathen? and in thine hand is there not power and might, so that none is able to withstand thee?

7. Art not thou our God, who didst drive out the inhabitants of this land before thy people Israel, and gavest it to the seed of Abraham thy friend for ever? Open Heaven 28th August 2020 Devotional

8. And they dwelt therein, and have built thee a sanctuary therein for thy name, saying,

9. If, when evil cometh upon us, as the sword, judgment, or pestilence, or famine, we stand before this house, and in thy presence, (for thy name is in this house,) and cry unto thee in our affliction, then thou wilt hear and help.

10. And now, behold, the children of Ammon and Moab and mount Seir, whom thou wouldest not let Israel invade, when they came out of the land of Egypt, but they turned from them, and destroyed them not;

11. Behold, I say, how they reward us, to come to cast us out of thy possession, which thou hast given us to inherit.

12. O our God, wilt thou not judge them? for we have no might against this great company that cometh against us; neither know we what to do; but our eyes are upon thee.

13. And all Judah stood before the LORD, with their little ones, their wives, and their children.

15. And he said, Hearken ye, all Judah, and ye inhabitants of Jerusalem, and thou king Jehoshaphat, Thus saith the LORD unto you, Be not afraid nor dismayed by reason of this great multitude; for the battle is not yours, but God’s.

16. To morrow go ye down against them; behold, they come up by the cliff of Ziz; and ye shall find them at the end of the brook, before the wilderness of Jeruel.

17. Ye shall not need to fight in this battle; set yourselves, stand ye still, and see the salvation of the LORD with you, O Judah and Jerusalem; fear not, nor be dismayed; to morrow go out against them; for the LORD will be with you.

18. And Jehoshaphat bowed his head with his face to the ground; and all Judah and the inhabitants of Jerusalem fell before the LORD, worshipping the LORD.

20. And they rose early in the morning, and went forth into the wilderness of Tekoa; and as they went forth, Jehoshaphat stood and said, Hear me, O Judah, and ye inhabitants of Jerusalem; Believe in the LORD your God, so shall ye be established; believe his prophets, so shall ye prosper.

21. And when he had consulted with the people, he appointed singers unto the LORD, and that should praise the beauty of holiness, as they went out before the army, and to say, Praise the LORD; for his mercy endureth for ever.

22. And when they began to sing and to praise, the LORD set ambushments against the children of Ammon, Moab, and mount Seir, which were come against Judah; and they were smitten.

24. And when Judah came toward the watch tower in the wilderness, they looked unto the multitude, and, behold, they were dead bodies fallen to the earth, and none escaped.

25. And when Jehoshaphat and his people came to take away the spoil of them, they found among them in abundance both riches with the dead bodies, and precious jewels, which they stripped off for themselves, more than they could carry away; and they were three days in gathering of the spoil, it was so much.

While many people see mountains as stumbling blocks, we as Christians should consider them as mere stepping stones to the top.

There was once a young king who loved the Lord and was sold out to God completely, so the Lord decided to bless him. God got three wealthy kings to attack this young king and when he heard about the impending attack, he ran to God. “Father, what have I done that all these problems are surrounding me?” Someone reading this devotional is asking God this same question. Don’t worry, all your problems will lead to great testimonies in the mighty name of Jesus.

God told the young king “This battle is not for you to fight, but to store up riches. You just praise me on your way to the battleground, taking along wheel barrows. I have a surprise waiting for you there.” The young king gathered his people and praised God like never before as they approached the battlefield.

God then told the three kings “Now begin to kill one another.” The three kings wiped out one another completely and left all the wealth they came with for this young king. It took him and his army of worshippers three days to transport it all back home. His name was Jehoshaphat (2 Chronicles 20:1-37).

There was also a small boy called David. A giant problem had risen up against his nation and everyone was afraid. He had no fear because he recognised that this one was a promotional problem.

When he was assured that solving the problem would guarantee his promotion, he faced it head on in the name of the God of Israel Jehovah – Nissi. Within minutes, the giants head was in his hands and he had become even more popular than the king of the nation.

One similarity between these two is that they praised the name of God. If you want all your problems to cause a promotion for you, spend good time praising the name of the Lord today. Sing like David:
“I will praise thee, O LORD, with my whole heart; I will shew forth all thy marvellous works.” – Psalm 9:1

Thank you for reading Today’s Open Heaven 28th August 2020 Devotional – A Promotion In The Problem by Pastor E.A Adeboye