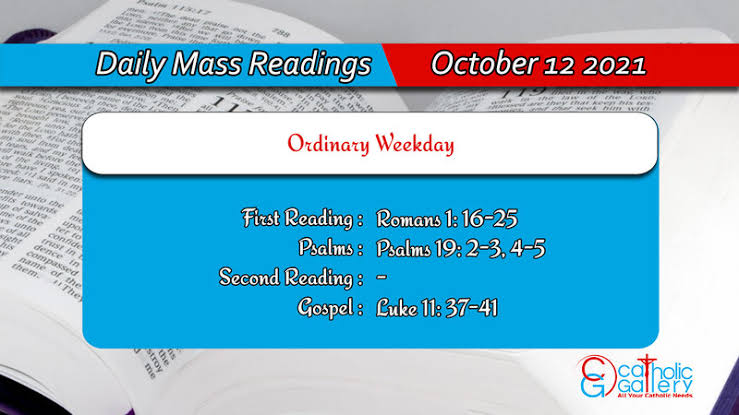 First Reading: Romans 1:16-25
16 For I am not ashamed of the gospel. For it is the power of God unto salvation to every one that believeth, to the Jew first, and to the Greek.

17 For the justice of God is revealed therein, from faith unto faith, as it is written: The just man liveth by faith.

18 For the wrath of God is revealed from heaven against all ungodliness and injustice of those men that detain the truth of God in injustice:

19 Because that which is known of God is manifest in them. For God hath manifested it unto them.

20 For the invisible things of him, from the creation of the world, are clearly seen, being understood by the things that are made; his eternal power also, and divinity: so that they are inexcusable.

21 Because that, when they knew God, they have not glorified him as God, or given thanks; but became vain in their thoughts, and their foolish heart was darkened.

22 For professing themselves to be wise, they became fools.

23 And they changed the glory of the incorruptible God into the likeness of the image of a corruptible man, and of birds, and of fourfooted beasts, and of creeping things.

24 Wherefore God gave them up to the desires of their heart, unto uncleanness, to dishonour their own bodies among themselves.

25 Who changed the truth of God into a lie; and worshipped and served the creature rather than the Creator, who is blessed for ever. Amen.

2 The heavens shew forth the glory of God, and the firmament declareth the work of his hands.

R. The heavens proclaim the glory of God.

4 There are no speeches nor languages, where their voices are not heard.

5 Their sound hath gone forth into all the earth: and their words unto the ends of the world.

R. The heavens proclaim the glory of God.

12 The word of God is living and effective, able to discern reflections and thoughts of the heart.

38 And the Pharisee began to say, thinking within himself, why he was not washed before dinner.

39 And the Lord said to him: Now you Pharisees make clean the outside of the cup and of the platter; but your inside is full of rapine and iniquity.

41 But yet that which remaineth, give alms; and behold, all things are clean unto you.