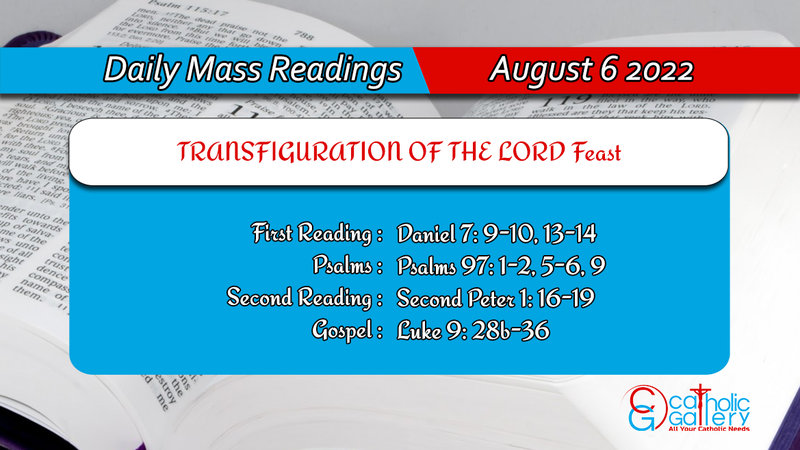 Read and Meditate on Today’s Catholic Daily Readings for 6 August 2022 – TRANSFIGURATION OF THE LORD Feast. May the Lord bless you as you study!

First Reading: Daniel 7: 9-10, 13-14
9 I beheld till thrones were placed, and the Ancient of days sat: his garment was white as snow, and the hair of his head like clean wool: his throne like flames of fire: the wheels of it like a burning fire.

10 A swift stream of fire issued forth from before him: thousands of thousands ministered to him, and ten thousand times a hundred thousand stood before him: the judgment sat, and the books were opened.

13 I beheld therefore in the vision of the night, and lo, one like the son of man came with the clouds of heaven, and he came even to the Ancient of days: and they presented him before him.

14 And he gave him power, and glory, and a kingdom: and all peoples, tribes and tongues shall serve him: his power is an everlasting power that shall not be taken away: and his kingdom that shall not be destroyed.

1 For the same David, when his land was restored again to him. The Lord hath reigned, let the earth rejoice: let many islands be glad.

Second Reading: Second Peter 1: 16-19
16 For we have not by following artificial fables, made known to you the power, and presence of our Lord Jesus Christ; but we were eyewitnesses of his greatness.

17 For he received from God the Father, honour and glory: this voice coming down to him from the excellent glory: This is my beloved Son, in whom I am well pleased; hear ye him.

18 And this voice we heard brought from heaven, when we were with him in the holy mount.

19 And we have the more firm prophetical word: whereunto you do well to attend, as to a light that shineth in a dark place, until the day dawn, and the day star arise in your hearts:

5c This is my beloved Son, with whom I am well-pleased; listen to him.

29 And whilst he prayed, the shape of his countenance was altered, and his raiment became white and glittering.

30 And behold two men were talking with him. And they were Moses and Elias,

31 Appearing in majesty. And they spoke of his decease that he should accomplish in Jerusalem.

32 But Peter and they that were with him were heavy with sleep. And waking, they saw his glory, and the two men that stood with him.

33 And it came to pass, that as they were departing from him, Peter saith to Jesus: Master, it is good for us to be here; and let us make three tabernacles, one for thee, and one for Moses, and one for Elias; not knowing what he said.

34 And as he spoke these things, there came a cloud, and overshadowed them; and they were afraid, when they entered into the cloud.

35 And a voice came out of the cloud, saying: This is my beloved Son; hear him.

36 And whilst the voice was uttered, Jesus was found alone. And they held their peace, and told no man in those days any of these things which they had seen.