MFM Devotional 20th January 2023: Lessons From The Life of Joseph of Arimathea 1

TOPIC: LESSONS FROM THE LIFE OF JOSEPH OF ARIMATHEA (I).
Dr. Daniel Kolawole Olukoya(DKO)

Memory Verse:
1 Timothy 6:10 – “For the love of money is the root of all evil: which while some coveted after, they have erred from the faith, and pierced themselves through with many sorrows.”

Motivational Quotes:
A rich man without Jesus is a poor man with money that will only buy eternal sorrow.

Prophetic Word for Today:
Receive the grace to make Jesus your priority, in the Name of Jesus.

57 That evening a rich man named Joseph came to Jerusalem. He was a follower of Jesus from the town of Arimathea.

58 He went to Pilate and asked to have Jesus’ body. Pilate gave orders for the soldiers to give Jesus’ body to him.

59 Then Joseph took the body and wrapped it in a new linen cloth.

60 He put Jesus’ body in a new tomb that he had dug in a wall of rock. Then he closed the tomb by rolling a very large stone to cover the entrance. After he did this, he went away.

61 Mary Magdalene and the other woman named Mary were sitting near the tomb.

Today, we shall begin a study series on the life of Joseph of Arimathea. Although, not much was said of him in the Scriptures, the few records we have about him teach us some great life lessons.

The first lesson we can learn from him is his attitude towards money. From our Fire Scripture, Joseph was no doubt a wealthy and prominent man, yet, he had a good attitude towards money. His life is a testament that you can be rich, successful, and be an ardent follower of Jesus, as well as contrary to the erroneous perception of some that one must be poor like Lazarus to make heaven.

Poverty does not take anyone to heaven, neither does wealth. It is the will of God that His children prosper. “Beloved, I wish above all things that thou mayest prosper and be in health, even as thy soul prospereth” (3 John: 2). But herein lies the question; can God trust you with riches?

God does not just give wealth to people for the fun of it. He gives it for a purpose and the purpose is to serve His kingdom. Joseph understood this principle, unlike the rich fool who was boastful about his wealth and died untimely (Luke 12:16-21). Joseph knew that empty, we came to the world and empty, we would depart and so, he didn’t allow his wealth to get into his head. He served the purposes of God with his money. Despite being wealthy, he had time for God. He created space to attend discipleship classes with Jesus. He had time to learn from the Master. He never allowed the deceitfulness of riches to choke salvation out of his life (Mark 4:19). He made the kingdom of God his priority and was awaiting it eagerly. He knew that his wealth cannot buy his soul on the last day.

MORNING
1. Father, give me the right attitude towards wealth, in the Name of Jesus.

2. The riches that will kill me and take me to hell will not come close to me, in the Name of Jesus.

3. Father, bless me with kingdom wealth, in the Name of Jesus.

EVENING
4. Arrow of poverty fired against my life, backfire, in the Name of Jesus.

5. I refuse to be a beggarly Christian, in the Name of Jesus.

6. Father, deposit into my bosom the forces of the gentiles and the wealth of sinners, in the Name of Jesus.

7. Resources of heaven, arise and promote my life, in the Name of Jesus.

Seeds of Destiny 20 January 2023: Your Thought And Your Action

MFM Daily Devotional 7th February 2023: When God Is With You(I) 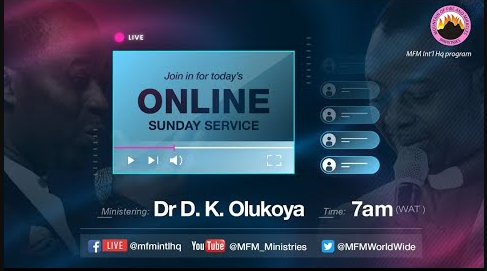