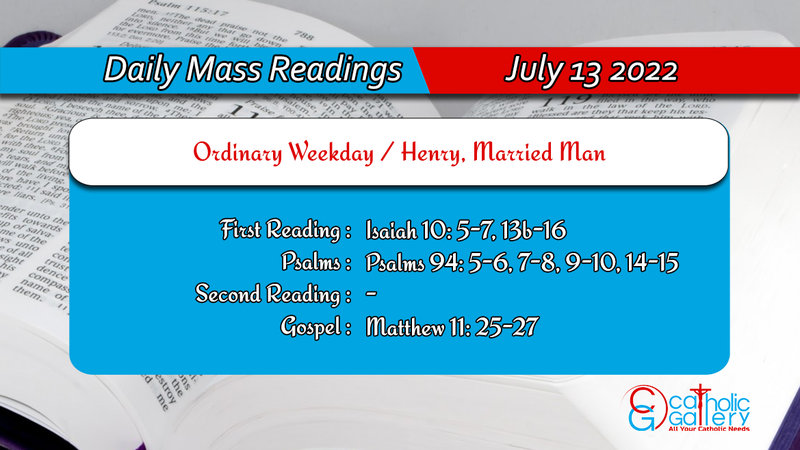 Read and Meditate on Today’s Catholic Daily Readings for 13 July 2022 –Ordinary Weekday / Henry, Married Man. May the Lord bless you as you study!

6 I will send him to a deceitful nation, and I will give him a charge against the people of my wrath, to take away the spoils, and to lay hold on the prey, and to tread them down like the mire of the streets.

13b By the strength of my own hand I have done it, and by my own wisdom I have understood: and I have removed the bounds of the people, and have taken the spoils of the princes, and as a mighty man hath pulled down them that sat on high.

14 And my hand hath found the strength of the people as a nest; and as eggs are gathered, that are left, so have I gathered all the earth: and there was none that moved the wing, or opened the mouth, or made the least noise.

16 Therefore the sovereign Lord, the Lord of hosts, shall send leanness among his fat ones: and under his glory shall be kindled a burning, as it were the burning of a fire.

5 Thy people, O Lord, they have brought low: and they have afflicted thy inheritance.

6 They have slain the widow and the stranger: and they have murdered the fatherless.

7 And they have said: The Lord shall not see: neither shall the God of Jacob understand.

8 Understand, ye senseless among the people: and, you fools, be wise at last.

9 He that planted the ear, shall he not hear? or he that formed the eye, doth he not consider?

10 He that chastiseth nations, shall he not rebuke: he that teacheth man knowledge?

14 For the Lord will not cast off his people: neither will he forsake his own inheritance.

15 Until justice be turned into judgment: and they that are near it are all the upright in heart.

25 Blessed are you, Father, Lord of heaven and earth, you have revealed to little ones the mysteries of the Kingdom.

Gospel: Matthew 11: 25-27
25 At that time Jesus answered and said: I confess to thee, O Father, Lord of heaven and earth, because thou hast hid these things from the wise and prudent, and hast revealed them to the little ones.

26 Yea, Father; for so hath it seemed good in thy sight.

27 All things are delivered to me by my Father. And no one knoweth the Son, but the Father: neither doth any one know the Father, but the Son, and he to whom it shall please the Son to reveal him.