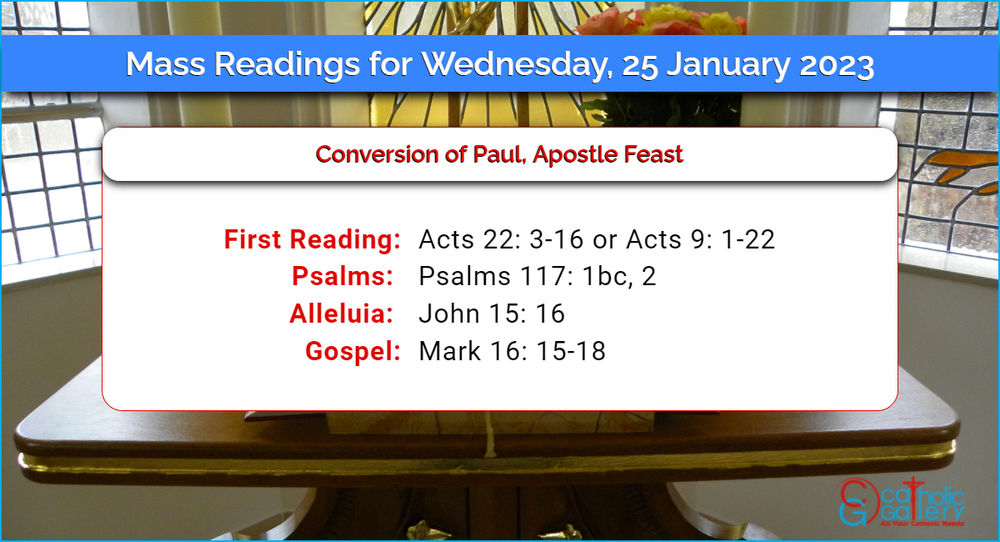 First Reading: Acts 22: 3-16 or Acts 9: 1-22
3 And he saith: I am a Jew, born at Tarsus in Cilicia, but brought up in this city, at the feet of Gamaliel, taught according to the truth of the law of the fathers, zealous for the law, as also all you are this day:

4 Who persecuted this way unto death, binding and delivering into prisons both men and women.

5 As the high priest doth bear me witness, and all the ancients: from whom also receiving letters to the brethren, I went to Damascus, that I might bring them bound from thence to Jerusalem to be punished.

6 And it came to pass, as I was going, and drawing nigh to Damascus at midday, that suddenly from heaven there shone round about me a great light:

7 And falling on the ground, I heard a voice saying to me: Saul, Saul, why persecutest thou me?

8 And I answered: Who art thou, Lord? And he said to me: I am Jesus of Nazareth, whom thou persecutest.

9 And they that were with me, saw indeed the light, but they heard not the voice of him that spoke with me.

10 And I said: What shall I do, Lord? And the Lord said to me: Arise, and go to Damascus; and there it shall be told thee of all things that thou must do.

11 And whereas I did not see for the brightness of that light, being led by the hand by my companions, I came to Damascus.

12 And one Ananias, a man according to the law, having testimony of all the Jews who dwelt there,

13 Coming to me, and standing by me, said to me: Brother Saul, look up. And I the same hour looked upon him.

14 But he said: The God of our fathers hath preordained thee that thou shouldst know his will, and see the Just One, and shouldst hear the voice from his mouth.

15 For thou shalt be his witness to all men, of those things which thou hast seen and heard.

16 And now why tarriest thou? Rise up, and be baptized, and wash away thy sins, invoking his name.

1 And Saul, as yet breathing out threatenings and slaughter against the disciples of the Lord, went to the high priest,

2 And asked of him letters to Damascus, to the synagogues: that if he found any men and women of this way, he might bring them bound to Jerusalem.

3 And as he went on his journey, it came to pass that he drew nigh to Damascus; and suddenly a light from heaven shined round about him.

4 And falling on the ground, he heard a voice saying to him: Saul, Saul, why persecutest thou me?

5 Who said: Who art thou, Lord? And he: I am Jesus whom thou persecutest. It is hard for thee to kick against the goad.

6 And he trembling and astonished, said: Lord, what wilt thou have me to do?

7 And the Lord said to him: Arise, and go into the city, and there it shall be told thee what thou must do. Now the men who went in company with him, stood amazed, hearing indeed a voice, but seeing no man.

8 And Saul arose from the ground; and when his eyes were opened, he saw nothing. But they leading him by the hands, brought him to Damascus.

9 And he was there three days, without sight, and he did neither eat nor drink.

10 Now there was a certain disciple at Damascus, named Ananias. And the Lord said to him in a vision: Ananias. And he said: Behold I am here, Lord.

11 And the Lord said to him: Arise, and go into the street that is called Stait, and seek in the house of Judas, one named Saul of Tarsus. For behold he prayeth.

12 (And he saw a man named Ananias coming in, and putting his hands upon him, that he might receive his sight.)

13 But Ananias answered: Lord, I have heard by many of this man, how much evil he hath done to thy saints in Jerusalem.

14 And here he hath authority from the chief priests to bind all that invoke thy name.

15 And the Lord said to him: Go thy way; for this man is to me a vessel of election, to carry my name before the Gentiles, and kings, and the children of Israel.

16 For I will shew him how great things he must suffer for my name’s sake.

17 And Ananias went his way, and entered into the house. And laying his hands upon him, he said: Brother Saul, the Lord Jesus hath sent me, he that appeared to thee in the way as thou camest; that thou mayest receive thy sight, and be filled with the Holy Ghost.

18 And immediately there fell from his eyes as it were scales, and he received his sight; and rising up, he was baptized.

19 And when he had taken meat, he was strengthened. And he was with the disciples that were at Damascus, for some days.

20 And immediately he preached Jesus in the synagogues, that he is the Son of God.

21 And all that heard him, were astonished, and said: Is not this he who persecuted in Jerusalem those that called upon this name: and came hither for that intent, that he might carry them bound to the chief priests?

22 But Saul increased much more in strength, and confounded the Jews who dwelt at Damascus, affirming that this is the Christ.

1bc O praise the Lord, all ye nations: praise him, all ye people.

R. Go out to all the world, and tell the Good News.

2 For his mercy is confirmed upon us: and the truth of the Lord remaineth for ever.

R. Go out to all the world, and tell the Good News.

16 I chose you from the world, to go and bear fruit that will last, says the Lord.

17 And these signs shall follow them that believe: In my name they shall cast out devils: they shall speak with new tongues.

18 They shall take up serpents; and if they shall drink any deadly thing, it shall not hurt them: they shall lay their hands upon the sick, and they shall recover. 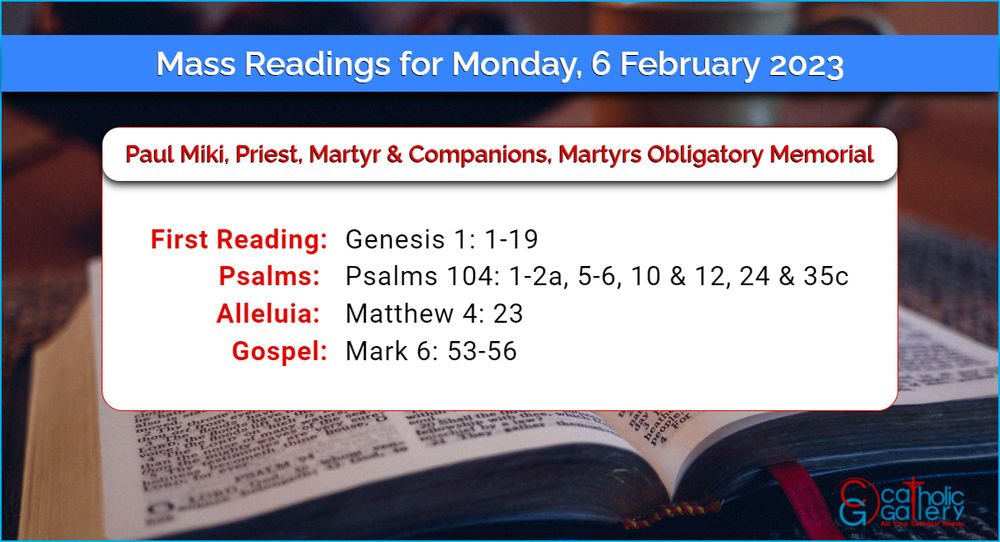 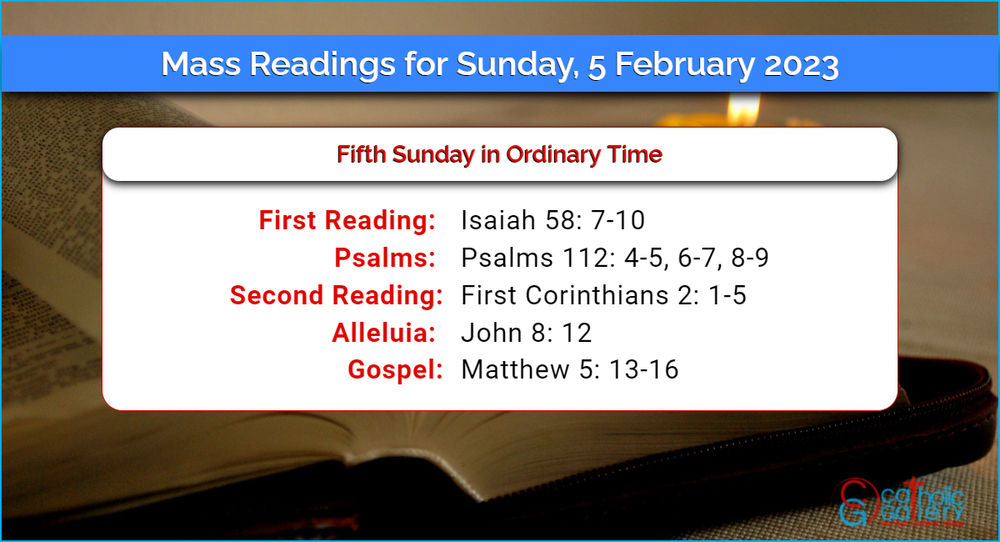 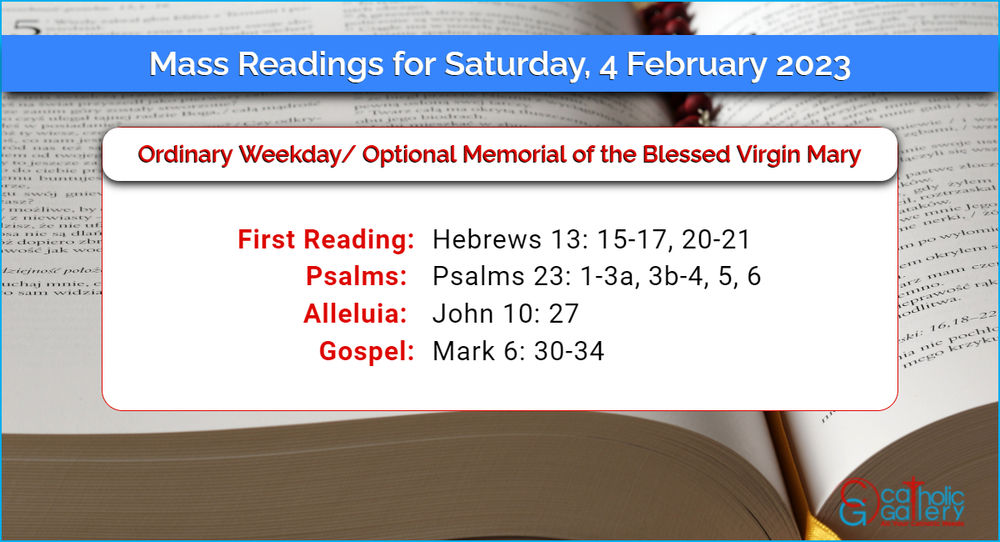 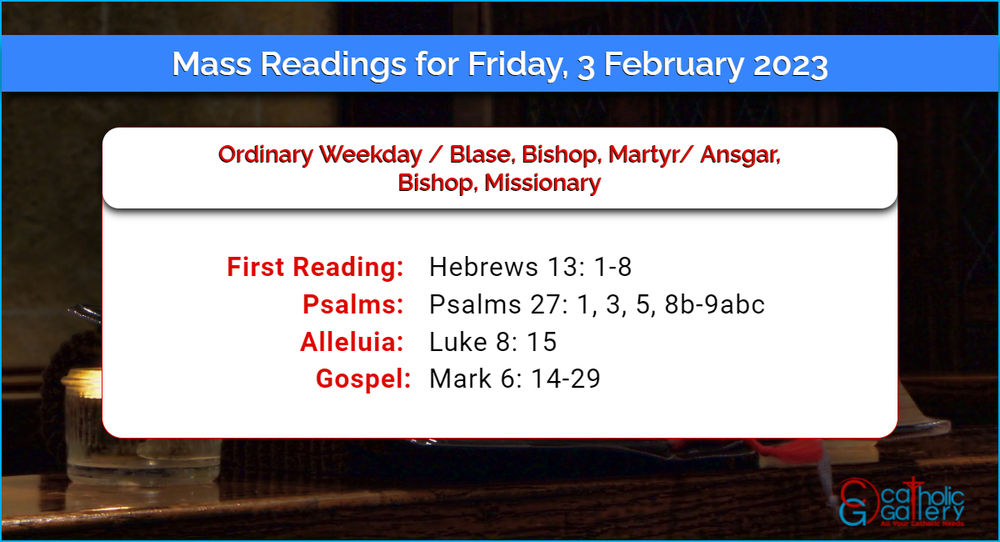