Welcome!!! Read Our Daily Bread Today’s Devotional for Saturday. The word of God is food to the spirit man. Read and digest the word of the Lord for today and see how powerfully it will impact you. 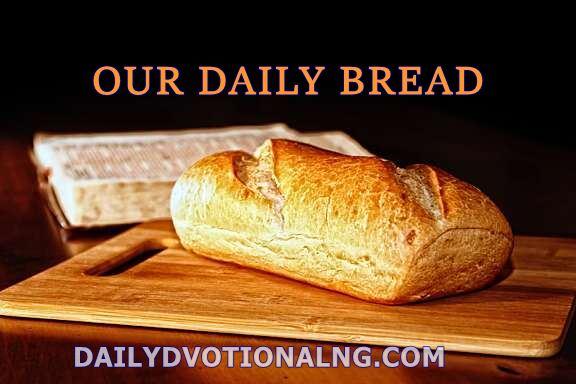 Bible Verse: I have indeed seen the misery of my people in Egypt. . . . So I have come down to rescue them. Exodus 3:7–8

Why did God ask Moses to remove his sandals? (Exodus 3:5). More than forty years later, the angel of the Lord would repeat this command to Moses’ successor, Joshua (Joshua 5:15). In Joshua 6:2, we learn that this “angel” is the Lord Himself. It wasn’t the ground itself that was holy, but rather God’s presence that made it so. Theologians also postulate that the sandals, which are in constant contact with the literal ground, symbolize all that’s earthly.

Footwear is considered as profane and common, in stark contrast to the holiness of God. This brings new meaning to the significance of Jesus washing His disciples’ feet in the upper room (John 13:2–17). Additionally, the removal of footwear was used in Old Testament times as a sign of sealing a covenant (see Ruth 4:7–8). By: Tim Gustafson

To my eyes, the Christmas tree looked to be ablaze in fire! Not because of artificial strings of lights but from real fire. Our family was invited to a friend’s altdeutsche Tradition, or the “old German way,” a celebration featuring delicious traditional desserts and a tree with real, lit candles. (For safety, the freshly cut tree was lit one night only.)

As I watched the tree appear to burn, I thought of Moses’ encounter with God in the burning bush. While tending sheep in the wilderness, Moses was surprised by a flaming bush that was somehow not consumed by the flames. As he approached the bush to investigate, God called to him. The message from the burning bush was not one of judgment but of rescue for the people of Israel. God had seen the plight and misery of His people who were enslaved in Egypt and had “come down to rescue them” (Exodus 3:8).

While God rescued the Israelites from the Egyptians, all of humanity still needed rescue—not just from physical suffering but also from the effects that evil and death brought into our world. Hundreds of years later, God responded by sending down the Light, His Son, Jesus (John 1:9–10), sent not “to condemn the world, but to save the world through him” (3:17). By: Lisa M. Samra