Welcome to Today’s Rick Warren Devotional (Daily Hope) for 2nd December 2022. The Word of God is food to the spirit man. Read and digest the word of the Lord for today and see how powerfully it will impact you.

Scripture: “It was by faith that Abraham obeyed when God called him to leave home and go to another land that God would give him as his inheritance. He went without knowing where he was going.” Hebrews 11:8 (NLT)

Sometimes, when God wants to grow your faith, he gives you the “Where Test.” If you’re asking, “Where, Lord?” and feel like God isn’t answering, you’re probably in the middle of a Where Test.

God wants to see if you’ll follow him where he leads—even when you don’t understand, don’t want to go, or don’t know where you’re going.

God used the Where Test with Abraham from the Bible. Hebrews 11:8 says, “It was by faith that Abraham obeyed when God called him to leave home and go to another land that God would give him as his inheritance. He went without knowing where he was going” (NLT).

Abraham was living in a big city called Ur, which is in modern-day Iraq. God told Abraham that he was going to make him into a great nation. But he wasn’t going to do it in Ur. He wanted Abraham to go to Palestine. And Abraham obeyed.

Did Abraham want to go? Probably not. He was settled in his home with his family and household and animals—and there were a lot of them, because Abraham was a wealthy man. That kind of move would have been a massive undertaking in that day.

Abraham was also 75 years old—not really the age when you’re looking to start your greatest adventure in life.

Abraham, by faith, obeyed God. He left home and went to another land. He passed the Where Test. Would you pass the same test?

Hebrews 11 goes on to say about Abraham, “Even when he reached the land God promised him, he lived there by faith—for he was like a foreigner, living in tents. And so did Isaac and Jacob, who inherited the same promise. Abraham was confidently looking forward to a city with eternal foundations, a city designed and built by God” (Hebrews 11:9-10 NLT).

You will live your whole life by faith; no matter where God leads you, nowhere on Earth is your forever home. But you can trust God’s promises for you. And you can look forward to your eternal home with him. 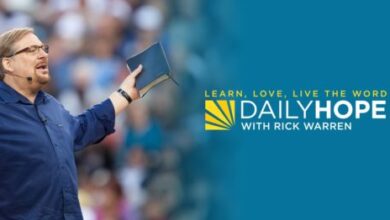