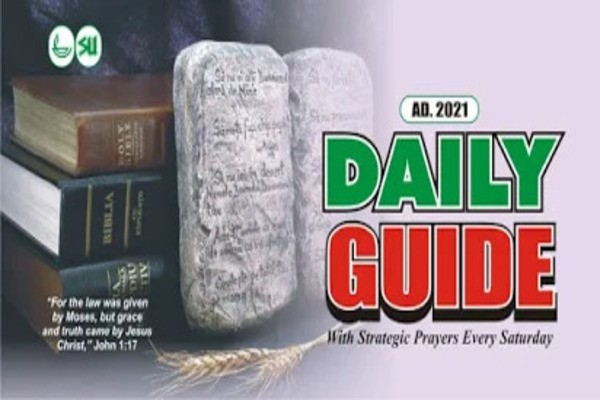 Today’s Devotional; Scripture Union Daily Guide for Tuesday 23rd February 2021. May you be blessed as you read on.

OPENING PRAYER: As I read through this passage dear Lord, let your word bring transformation to my life.

45All these curses will come on you. They will pursue you and overtake you until you are destroyed, because you did not obey the Lordyour God and observe the commands and decrees he gave you. 46They will be a sign and a wonder to you and your descendants forever. 47Because you did not serve the Lordyour God joyfully and gladly in the time of prosperity, 48therefore in hunger and thirst, in nakedness and dire poverty, you will serve the enemies the Lordsends against you. He will put an iron yoke on your neck until he has destroyed you. 49The Lordwill bring a nation against you from far away, from the ends of the earth, like an eagle swooping down, a nation whose language you will not understand, 50a fierce-looking nation without respect for the old or pity for the young. 51They will devour the young of your livestock and the crops of your land until you are destroyed. They will leave you no grain, new wine or olive oil, nor any calves of your herds or lambs of your flocks until you are ruined. 52They will lay siege to all the cities throughout your land until the high fortified walls in which you trust fall down. They will besiege all the cities throughout the land the Lordyour God is giving you. 53Because of the suffering your enemy will inflict on you during the siege, you will eat the fruit of the womb, the flesh of the sons and daughters the Lordyour God has given you. 54Even the most gentle and sensitive man among you will have no compassion on his own brother or the wife he loves or his surviving children, 55and he will not give to one of them any of the flesh of his children that he is eating. It will be all he has left because of the suffering your enemy will inflict on you during the siege of all your cities. 56The most gentle and sensitive woman among you?so sensitive and gentle that she would not venture to touch the ground with the sole of her foot?will begrudge the husband she loves and her own son or daughter 57the afterbirth from her womb and the children she bears. For in her dire need she intends to eat them secretly because of the suffering your enemy will inflict on you during the siege of your cities. 58If you do not carefully follow all the words of this law, which are written in this book, and do not revere this glorious and awesome name?the Lordyour God? 59the Lordwill send fearful plagues on you and your descendants, harsh and prolonged disasters, and severe and lingering illnesses. 60He will bring on you all the diseases of Egypt that you dreaded, and they will cling to you. 61The Lordwill also bring on you every kind of sickness and disaster not recorded in this Book of the Law, until you are destroyed. 62You who were as numerous as the stars in the sky will be left but few in number, because you did not obey the Lordyour God. 63Just as it pleased the Lordto make you prosper and increase in number, so it will please him to ruin and destroy you. You will be uprooted from the land you are entering to possess. 64Then the Lordwill scatter you among all nations, from one end of the earth to the other. There you will worship other gods?gods of wood and stone, which neither you nor your ancestors have known. 65Among those nations you will find no repose, no resting place for the sole of your foot. There the Lordwill give you an anxious mind, eyes weary with longing, and a despairing heart. 66You will live in constant suspense, filled with dread both night and day, never sure of your life. 67In the morning you will say, “If only it were evening!” and in the evening, “If only it were morning!”?because of the terror that will fill your hearts and the sights that your eyes will see. 68The Lordwill send you back in ships to Egypt on a journey I said you should never make again. There you will offer yourselves for sale to your enemies as male and female slaves, but no one will buy you.

Question(s) for Reflection:
• Is there any warning for me to heed?
• What is God revealing to me in this passage?

This is clearly seen in the life of the Israelites (see 2 Kings 17:7-23). Reflect on vs.65-67. Many people, especially in several nations in Africa are living in anxiety and despair. They are not sure of the next moment because of various insurgencies and wars, bad governance, economic hardship, famine, epidemics and various kinds of natural disasters, etc.

In what way can you help people overcome their anxieties? God did not spare His own favoured people when they disobeyed Him. All the blessings they once enjoyed turned to horrific disaster. Hence, the reason we should flee from the sin of disobedience lest we too face destruction.

• Any new insight or reinforcement of what you already know?

Closing Prayer:
• Ask God to give you a willing heart to obey Him fully and to follow His word carefully every day.
• Pray for the conversion of unbelieving members of your family and extended family. Pray that God will send them witnesses they can believe.

Offer a prayer of faith in line with 2 Chronicles 20:17 – Ye shall not need to fight in this battle: set yourselves, stand ye still, and see the salvation of the LORD with you, O Judah and Jerusalem: fear not, nor be dismayed; to morrow go out against them: for the LORD will be with you.

Our Daily Bread 2021 Devotional
9 hours ago 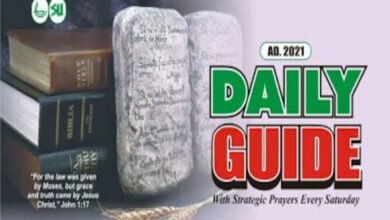 Scripture Union Daily Guide 27th February 2021 Devotional – To Save Us, He Became One Of Us