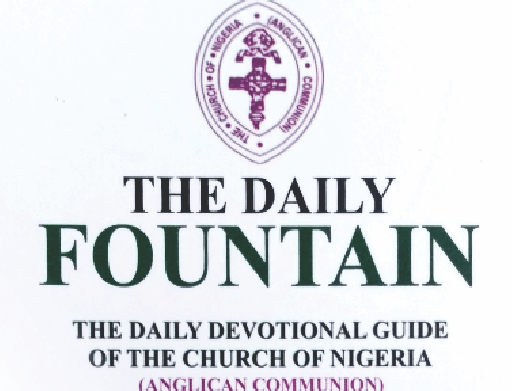 DO YOU KNOW? You can be more inspired by reading other inspirational devotionals by great Authors. Click Link To Read: TODAY DEVOTIONAL

TODAY’S TOPIC: PRAY FOR YOUR LEADERS

TEXT: Daniel 10:1-11:1(NKJV)
1. In the third year of Cyrus king of Persia a message was revealed to Daniel, whose name was called Belteshazzar. The message [was] true, but the appointed time [was] long; and he understood the message, and had understanding of the vision.
2. In those days I, Daniel, was mourning three full weeks.
3. I ate no pleasant food, no meat or wine came into my mouth, nor did I anoint myself at all, till three whole weeks were fulfilled.

4. Now on the twenty-fourth day of the first month, as I was by the side of the great river, that [is,] the Tigris,
5. I lifted my eyes and looked, and behold, a certain man clothed in linen, whose waist [was] girded with gold of Uphaz!
6. His body [was] like beryl, his face like the appearance of lightning, his eyes like torches of fire, his arms and feet like burnished bronze in color, and the sound of his words like the voice of a multitude.

7. And I, Daniel, alone saw the vision, for the men who were with me did not see the vision; but a great terror fell upon them, so that they fled to hide themselves.
8. Therefore I was left alone when I saw this great vision, and no strength remained in me; for my vigor was turned to frailty in me, and I retained no strength.
9. Yet I heard the sound of his words; and while I heard the sound of his words I was in a deep sleep on my face, with my face to the ground.

10. Suddenly, a hand touched me, which made me tremble on my knees and [on] the palms of my hands.
11. And he said to me, “O Daniel, man greatly beloved, understand the words that I speak to you, and stand upright, for I have now been sent to you.” While he was speaking this word to me, I stood trembling.
12. Then he said to me, “Do not fear, Daniel, for from the first day that you set your heart to understand, and to humble yourself before your God, your words were heard; and I have come because of your words.
13. “But the prince of the kingdom of Persia withstood me twenty-one days; and behold, Michael, one of the chief princes, came to help me, for I had been left alone there with the kings of Persia.

14. “Now I have come to make you understand what will happen to your people in the latter days, for the vision [refers] to [many] days yet [to come.”] 15. When he had spoken such words to me, I turned my face toward the ground and became speechless.
16. And suddenly, [one] having the likeness of the sons of men touched my lips; then I opened my mouth and spoke, saying to him who stood before me, “My lord, because of the vision my sorrows have overwhelmed me, and I have retained no strength.

17. “For how can this servant of my lord talk with you, my lord? As for me, no strength remains in me now, nor is any breath left in me.”
18. Then again, [the one] having the likeness of a man touched me and strengthened me.
19. And he said, “O man greatly beloved, fear not! Peace [be] to you; be strong, yes, be strong!” So when he spoke to me I was strengthened, and said, “Let my lord speak, for you have strengthened me.”

20. Then he said, “Do you know why I have come to you? And now I must return to fight with the prince of Persia; and when I have gone forth, indeed the prince of Greece will come.
21. “But I will tell you what is noted in the Scripture of Truth. (No one upholds me against these, except Michael your prince.
22. “Also in the first year of Darius the Mede, I, [even] I, stood up to confirm and strengthen him.)

The Scripture enjoins us to pray for our leaders (cf 1 Timothy 2:2). In Daniel 10:13, we are told “the Prince of the kingdom of Persia withstood… (Daniel) twenty-one days” in the course of his prayers, until God sent angel Michael to help him. The “prince” referred to here, was an evil angel appointed by Satan to control the Persian Government, of which neither Cyrus, king of Persia (10:1) nor Darius, the Mede (11:1) had any knowledge of, talk less of waging war against him.

The prince was charged to supervise the affairs of Persia, influencing its religious, social, and political structures to works of evil. We read in Ephesians 6:12 that there are principalities, powers, rulers of the darkness of this age, and “spiritual hosts of wickedness in the heavenly places.” Very often, we criticise those in positions of authority, with no thought that they may be working under the influence of evil forces beyond their control.

Nigeria, like many nations around the world, is facing terrible times and people tend to heap much of the blame on the leaders. This is why we find protests going on in many countries. Inasmuch as the leaders may have their shortcomings, we must not rule out the fact that no amount of constructive criticism can help them perform better because of demonic influence. Hence, like Daniel, we need to pray for those in positions of authority.

PRAYER: Father, help us to talk less and pray more for our leaders, in Jesus Christ’s name. Amen.

Streams in the Desert 21 November 2022 | Devotional for Monday