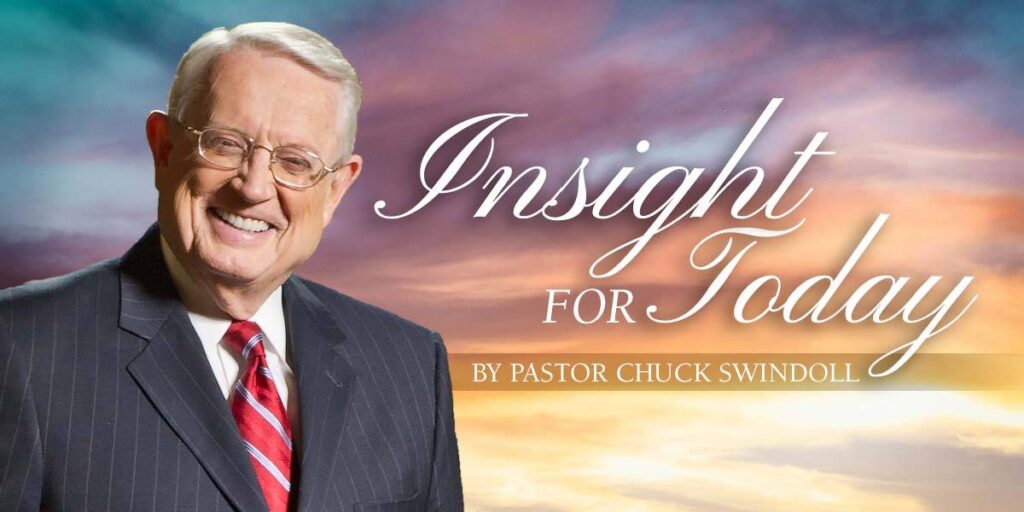 Welcome to Insight For Today Daily Devotional 18 October 2022 Tuesday Message by Pastor Chuck Swindoll. God bless you as you study!

When it comes to the topic of rebellion, King Solomon’s story is pretty incredible. Although bright, rich, capable, and the son of a famous father, Solomon became an insolent, carnal man. We need to see how God dealt with him—the epitome of defiance.

The part of Solomon’s biography that interests us today is recorded in 1 Kings 11. This is not a teenaged, rebellious son living under the roof of his parents; this is a middle-aged man who has reached the pinnacle of success. (Remember, there is no age restriction on defiance—you can be defiant and be up in years. You can be defiant as a child, a teenager, or an adult.)

By now, Solomon was “running the show” of the kingdom. But, like a bolt out of the blue, he broke free. He must have thought, “I’m going to get my way regardless.” He seemed to change overnight. When that happens, it’s time for people like us to sit up and learn some lessons. Solomon’s life continues to be a warning to all of us.

Actually, Solomon’s defiance was not a sudden thing. Not at all. There were some seeds he’d planted early in life which he later harvested in adulthood.

The first were seeds of compromise. Remember when he had an alliance with Pharaoh and married Pharaoh’s daughter? The story is recorded in 1 Kings, chapter 3. As a result of that compromising alliance, he began to make concessions in his spiritual walk. The compromise seeds grew into a loss of distinction as a sensitive man of God. He lost his distinction as a monotheistic Jewish ruler.

He had been instructed not to cohabit or even mingle with foreign women. His Jewish upbringing included strong admonitions against intermarrying with Gentiles. The seeds of compromise were now harvested in a loss of distinction.

A little later on in his life, Solomon planted seeds of extravagance. He lived extravagantly. He spent extravagantly. He built extravagantly. There were no parameters on his budget. He was able to buy at will, build whatever he desired, and live wherever and however he wished. Self-control and restraint were not in his vocabulary. In the journal he kept, Ecclesiastes, we discover that his fast-lane, go-for-broke lifestyle led to cynicism, boredom, and disillusionment. Such is the fruit of extravagance.

Third, there was unaccountability. The more closely you study his managerial habits, the more you realize Solomon was never willing to be accountable—not to any of his counselors, not to any of the prophets, not to any of his wives who surrounded him. We never read of Solomon’s asking for straight answers or listening to sound advice.

He mentions the wisdom of it—theoretically—in the Book of Proverbs, but it is conspicuously absent in his life. He operated like the Lone Ranger. He was close-minded. Ultimately, he even ignored what God was saying through His spokesmen, which is lethal for any spiritual leader.

The seeds of unaccountability were finally harvested . . . as they always are. The fruit? Unchecked independence. Nobody can get away with unaccountability. After a while, you’ve got to pay the piper. And that’s what Solomon did in the latter years of his life.

One more category of seeds should be mentioned—the seeds of idolatry. When harvested, idolatry led to lust and open defiance.

This is precisely where we find Solomon in 1 Kings 11. The man is living in the backwash of carnality. He doesn’t know it, but he is about to be dealt with by the Lord God, who always takes a dim view of defiance.

Now King Solomon loved many foreign women along with the daughter of Pharaoh: Moabite, Ammonite, Edomite, Sidonian, and Hittite women, from the nations concerning which the LORD had said to the sons of Israel, “You shall not associate with them, nor shall they associate with you, for they will surely turn your heart away after their gods.” Solomon held fast to these in love. (1 Kings 11:1–2)

Solomon not only married foreign women, he married many of them, in direct defiance of Scripture. Defiance always denies Scripture willfully—not ignorantly, willfully.

We should not be surprised to read in the very next verse that “his wives turned his heart away” (11:4). We don’t use that expression today. We use the words “turned off.” He was “turned off” to spiritual things. Take time to note the harvest of Solomon’s seeds of defiance in verses 4–8. His defiance was his downfall. In Part Three we’ll look at God’s response.

This devotional is part two in a five-part series.